It’s advertised everywhere in Madrid – on huge banners in the Metro, on bus stops, in the mainstream media and of course through specialised flamenco channels. Suma Flamenca, Madrid’s most important flamenco festival, is upon us. The month-long festival boasts more than 300 shows and concerts during June in different venues throughout the capital. And with such a huge program, choosing what to see can prove a tad overwhelming. So let me help you out with a few recommendations.

The big shows. The large-scale shows are staged in the grand rooms of the Teatros del Canal. Arcángel and Rocío Márquez are two of the most prominent young flamenco singers of our time, and they will be singing on 11 June and 12 June respectively. There is no flamenco dancing in either of these shows, so if it’s dancing that you’re after, then you’ll love Olga Pericet, who will be performing in excellent musical company on 13 June.

Buy your tickets from the Teatros del Canal website.

The intimate shows. A series of cosier shows will be held at the Sala San Juan de la Cruz, Teatro de la Abadía. Guitarist and composer Rafael Riqueni is taking the opportunity to make his comeback to Madrid’s public arena by giving a highly-recommended guitar-only concert on 24 June. If you’re more in the mood for some dance action, then I wouldn’t think twice about attending the 26 June performance of El Yiyo and El Güito called “Esencias Flamencas” – a great opportunity to see two different generations on stage.

You can get your tickets from the Teatro de la Abadía website.

The fusion shows. In the Suma Flamenca festival there’s also room for less traditional flamenco, like that performed by Pepe Habichuela and Jorge Pardo in their “Flamenco Universal” show on 26 June at the Círculo de Bellas Artes – Teatro Fernando de Rojas. The show will be a delightful flamenco whirl of guitars, flutes, saxophone, percussion and base, spiced up with dance.

Get your tickets directly from the Círculo de Bellas Artes website.

Hello,
I am so glad I found this website. I think I will book a time when I am in Madrid
September 2020. Right now, I am researching things to do and see when I
am in Madrid. Are there shows in September?
Thank you.

Sure, there are fantastic shows all year round in Madrid! Check out my post on the best places to see flamenco in Madrid 🙂 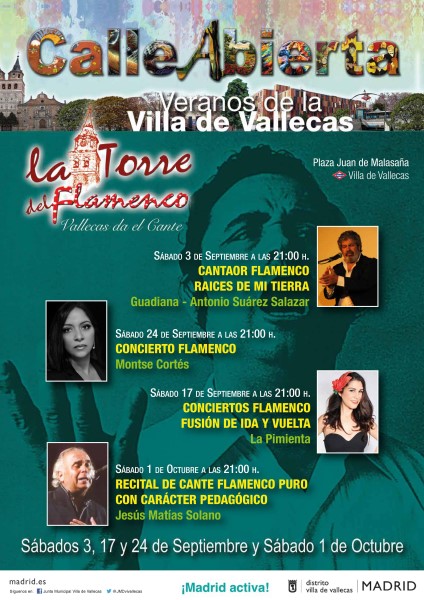 I count myself lucky to be excited about September each year, and this is due mainly to… well yes, flamenco! My dance and rhythm classes resume, and the calendar fills up with fantastic flamenconess around Read more…